John Naka wasn't psychic, but he always had a vision for the future of a bonsai. When conducting workshops and demonstrations, he found it easier to sketch his ideas on paper rather than express himself verbally. These treasured works of art became the inspiration as his students developed their trees. 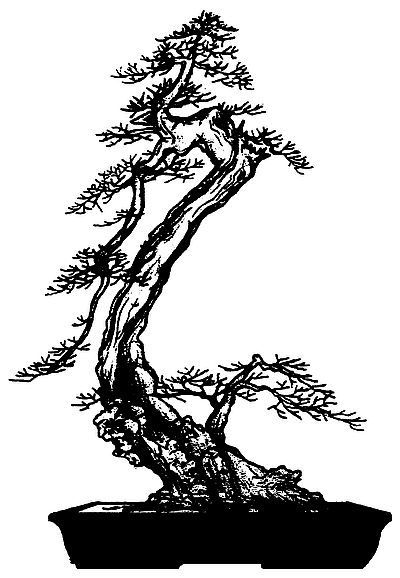 John's vision for his pomegranate.

When it came to his own collection, John rarely made sketches. Whether refining an existing bonsai or beginning to style collected material from the mountains, John applied his vision directly to the tree.

Marybel Balendonck, a dear friend and favorite student of John, was in charge of creating brochures for his two bonsai organizations: California Bonsai Society (which he co-founded) and Nanpukai (his study group of select students). Once or twice a year, she gently twisted his arm to sketch trees for the brochure covers, and he generated several sketches based on trees from his own collection.

In 2000, when John sketched a tree for the annual Nanpukai show brochure, the subject he chose was his twin-trunk pomegranate. John was fond of pomegranates and cultivated numerous varieties, enjoying their seasonal changes as well as their flowers and fruit.

Marybel had the brochure printed and then filed away the sketch with several others. After John passed away in 2004, she began recycling John's old sketches for new brochures. In 2006, California Bonsai Society's annual show brochure featured John's twin-trunk pomegranate sketch. At that time, I was looking after most of John's bonsai collection. I recognized the trunk of the pomegranate in my back yard, but nothing else about the tree resembled the sketch. 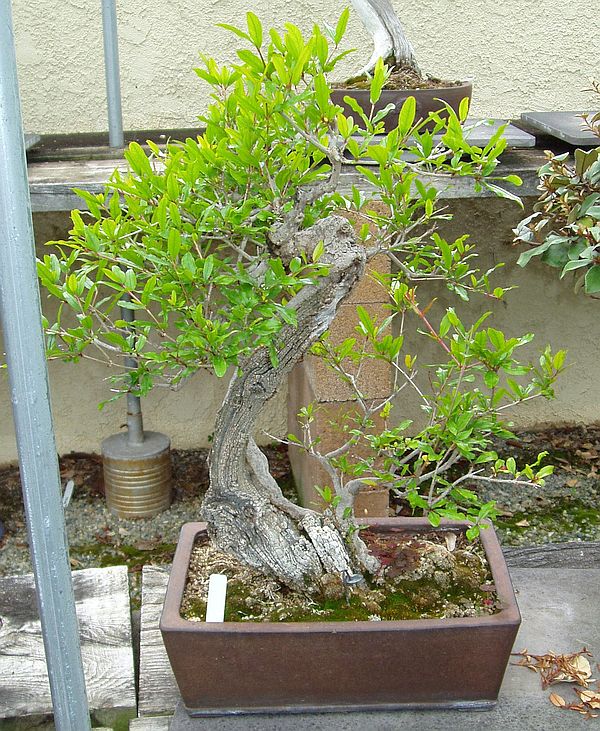 A happy tree in John's backyard.

The pomegranate has a wonderful curving main trunk with considerable shari (dead wood). All branches on the main trunk are near the apex. The smaller, secondary trunk is embraced by the curve of the main tree. For many years, this tree has lived in a beautiful antique Chinese pot: deep, with straight sides and a fabulous unglazed brown patina.

For his sketch, John lengthened the left branch on the main tree. The branch follows the line of the trunk and brings foliage, flower, and fruit to a previous void. John also changed the pot: the curved sides of the pot in the sketch mimic the curve in the trunk, and the shallow depth relates better to the delicate feel of the tree.

Lengthening one branch and replacing the pot of the actual tree would have made a dramatic difference, but John never made those changes. In his final years, he indulged his passion for painting. He was an artist at heart, and forever creative. Fortunately, the sketch made his wishes for the pomegranate known. 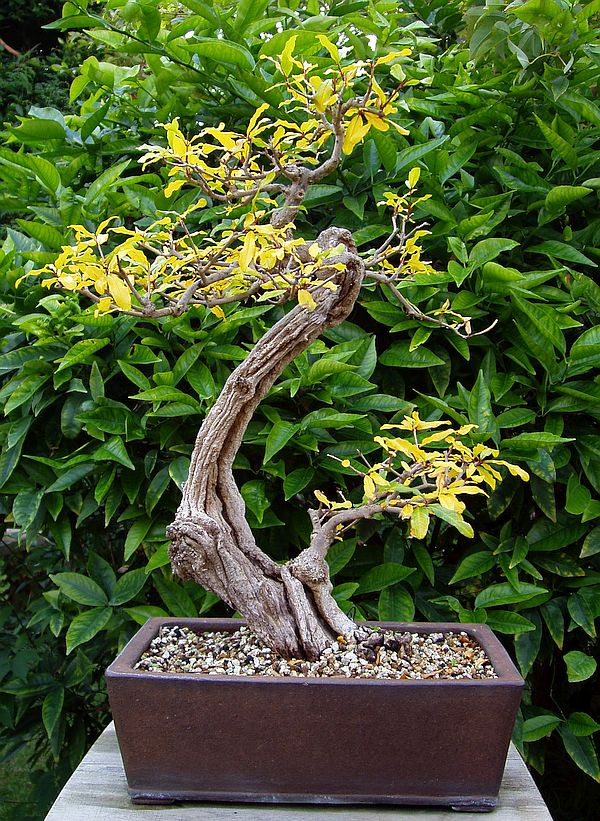 Repotted and now ready for re-styling.

My first task was to evict the family of termites feasting on the dead wood of the main trunk. John's favored method was to dunk the entire tree in a malathion bath. It still works quite well.

Next, numerous crossing or leggy branches needed removal. After repotting, the tree recovered for one year before being trimmed to attain the silhouette of the sketch. 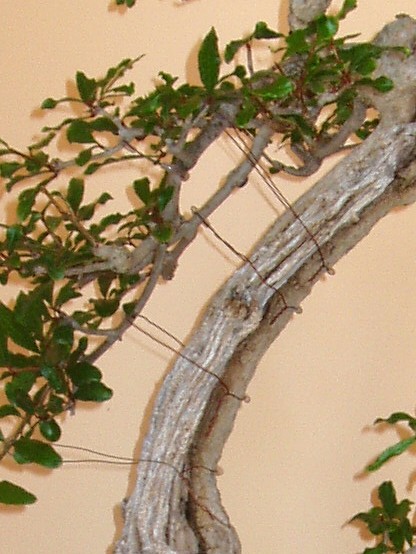 The large branch on the left needed to be lowered into proximity with the trunk. Pomegranate doesn't respond well to wire wrapped around its branches, so I gently used plastic tubing on guy wires to protect the bark. I pinched off any flowers so all energy would go into branch growth. As the tree began to resemble John's sketch, the deep pot became a distraction and needed a replacement.

John Naka enjoyed retelling a story about two students who purchased bonsai with mismatched pots. This brought to John's mind the ancient Chinese proverb "Isseki Nichou" ("catch two birds with one pebble")*, which in this case meant "make one change, and two trees will benefit."

After the students exchanged pots, both trees looked gorgeous–each perfectly matched to its container, without an additional expenditure.

The same proverb and the same procedure also applied to two of John's own trees. For many years, John's two-trunk pomegranate with its delicate, curved trunk lived in a deep, rectangular pot with powerful, straight sides. 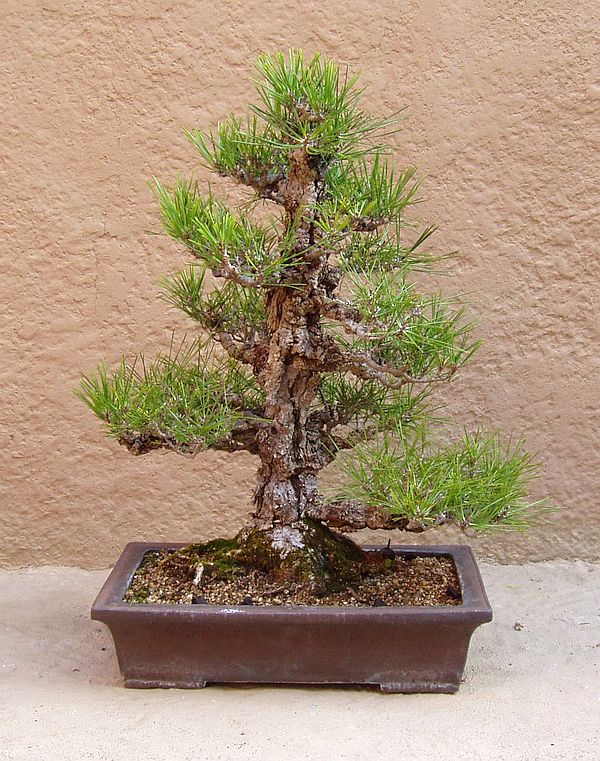 Another bonsai in need of a different container was John's formal-upright cork-bark pine. It lived just a few feet away from the pomegranate, but it was not as full of life. The tree displayed distress with weak candles and discolored needles. Its thick trunk and branches were impressive, but they overpowered the shallow, rectangular pot.

The roots were too confined in its pot and the surface roots were above the soil. A deeper pot would not only provide more room for the roots, but also be more aesthetically pleasing.

Both trees had been styled by John and were about the same size. One was delicate and the other powerful. The antique pots were also his. However, the strong tree was in the delicate pot and the delicate tree was in the powerful pot. After a swap, each tree was matched to a more harmonious pot. 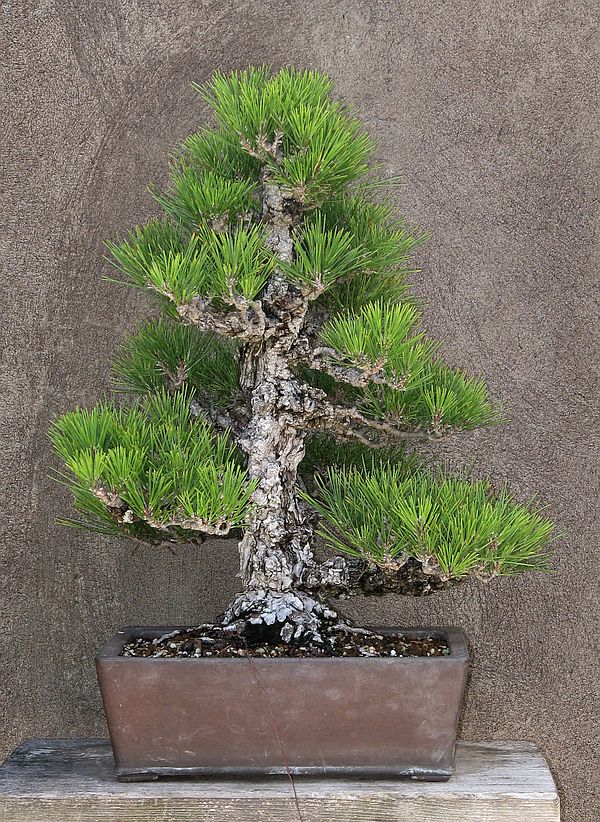 A healthier tree in a perfect pot.

The masculine pine tree is now planted in a deeper, strong pot that balances well with the thick branches and trunk. Both beauty and health have improved with the change. 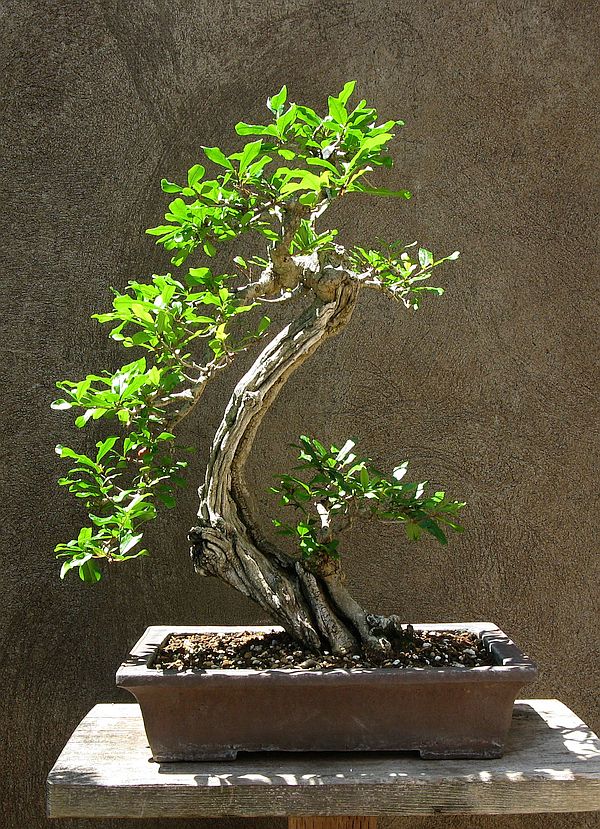 A beautiful tree inspired by a sketch.

The pomegranate now resides in a container that has perfect proportions; its curved sides reflect the curve in the trunk. It took only one afternoon to swap two pots, but John's beautiful trees now look stunning; finally, John's vision has been accomplished.

*This proverb is just one of 287 recited by John Naka and collected by Nina Shire Ragle in her book Even Monkeys Fall Out of Trees (Nippon Art Forms, 1987).